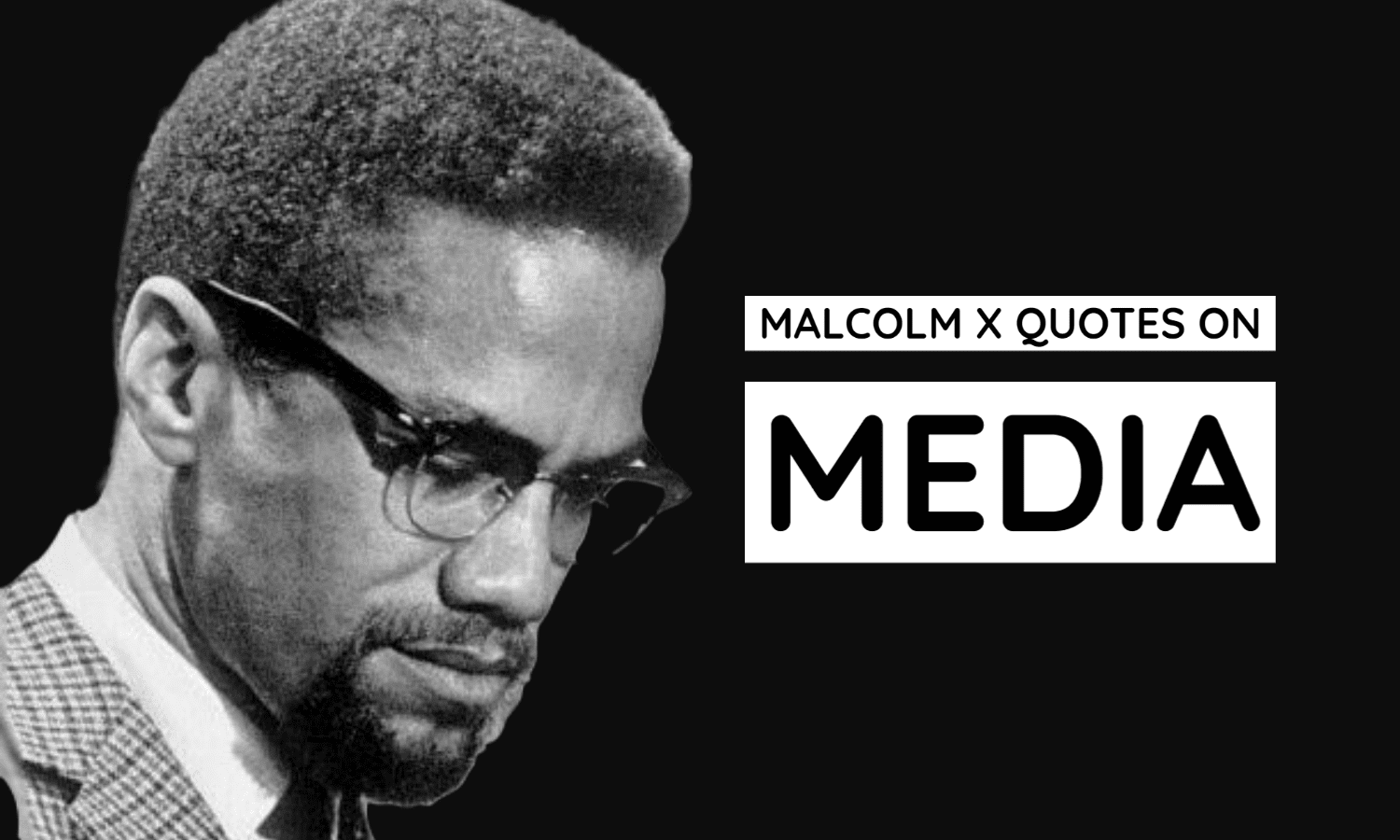 In this post, we have mentioned all the Quotes that Malcolm X used to say about media.

Before starting with the Malcolm X Quotes on media, let us briefly introduce Malcolm X.

Malcolm X was an American revolutionary and an electrifying spokesman for the Nation of Islam.

Malcolm X fought to attain civil rights through militant self-defence. This organisation will give the black man in this country the right to defend himself by any means necessary.

Malcolm was born on May 19th, 1925, in Omaha, Nebraska and grew up in eastern Michigan, where he suffered the death of his father in 1931.

Several years later, Malcolm’s mother was placed in a mental institution and lived in foster homes until he dropped out of school at 15.

Malcolm X was a brilliant young man, but he told the teacher he wanted to be a lawyer, and that teacher suggested instead that he be a carpenter, which begins Malcolm X’s slow slide out.

After moving to Boston, Malcolm fell into a life of drugs and crime at 20 years old. Malcolm was sentenced to 10 years in jail for robbery.

While imprisoned, Malcolm joined the Nation of Islam; upon his release in 1952, he changed his name to Malcolm X. Most people who are descendants of formerly enslaved Africans carry the last name of their former masters.

Families and Malcolm X let go of that name. And he chose X to symbolise his unknown African name from 1952 to 1960.

Malcolm X expanded the nation of Islam from roughly 400 to 40,000 members. But as an opposing voice to integration, Malcolm X incited fear and controversy.

Malcolm X was the counterpoint to Dr King and the civil rights movement. They were talking about nonviolence and peace and love and cooperation.

Malcolm never participated in violence, but he was about, you know, we have to fight back.

He spoke for so many African Americans terrified of saying the things he was saying, anyone who stains in the wave of your, my freedom, our human dignity.

What Malcolm X did drew so many people to him as he had urgent and young energy, and I think he triggered a certain kind of action in people.

A specific type of self-esteem that I’m worthy of challenging the status. In 1963, tensions erupted between Malcolm X and the Nation of Islam due to his growing popularity and his objection to the extramarital affairs of Elijah Muhammad.

Malcolm X had this life-changing event. When he went to Mecca, he went outside of America and connected to the global image of Islam. He came back differently and felt that everyone was his brother.

On February 21st, 1965, while preparing a speech in a Manhattan ballroom, Malcolm X was rushed by three shooters from the nation of Islam and was killed by 21 shots to his body.

His posthumous autobiography, published in 1965, was named by Time magazine as one of the ten required non-fiction books of all time and became a film in 1992, starring Denzel Washington.

Here is the list of Malcolm X’s Quotes about the Media.

I hope you have enjoyed all the quotes of Malcolm X on Media mentioned above. You can share these quotes with friends and family. If you want to use the images of these quotes, kindly contact us before doing so.

link to Best and Short Instagram Captions About Sisters

Sisters are the only ones who can find you and tell you that you’re beautiful when you feel like an idiot #sistersonly Sisters are like pink and glitter. They’ll show up on your wall in their...

Is Course Hero Plagiarism Free If you plan to get a subscription to Course Hero but don't know whether Course Hero provides Plagiarism free content to its users. Then you must read this article to...

Effective Quote is where you get Career Guide, Writing Guide and Reading Guide Quotes and Premium Subscription at a discounted price. We're in love with the intense feelings of freedom and adrenaline that only this blog can give us. Learn more about us below.