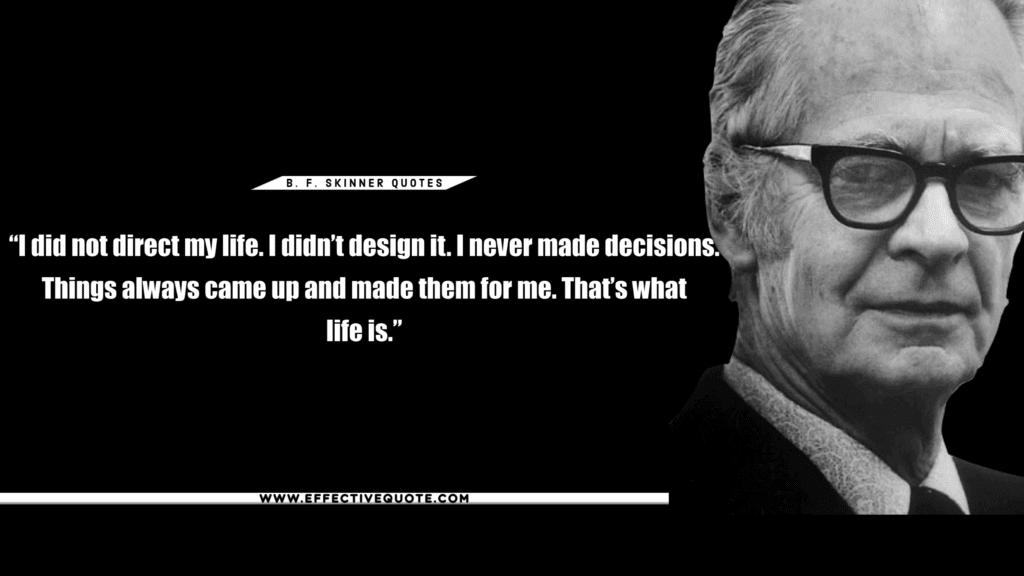 “I did not direct my life. I didn’t design it. I never made decisions. Things always came up and made them for me. That’s what life is.” 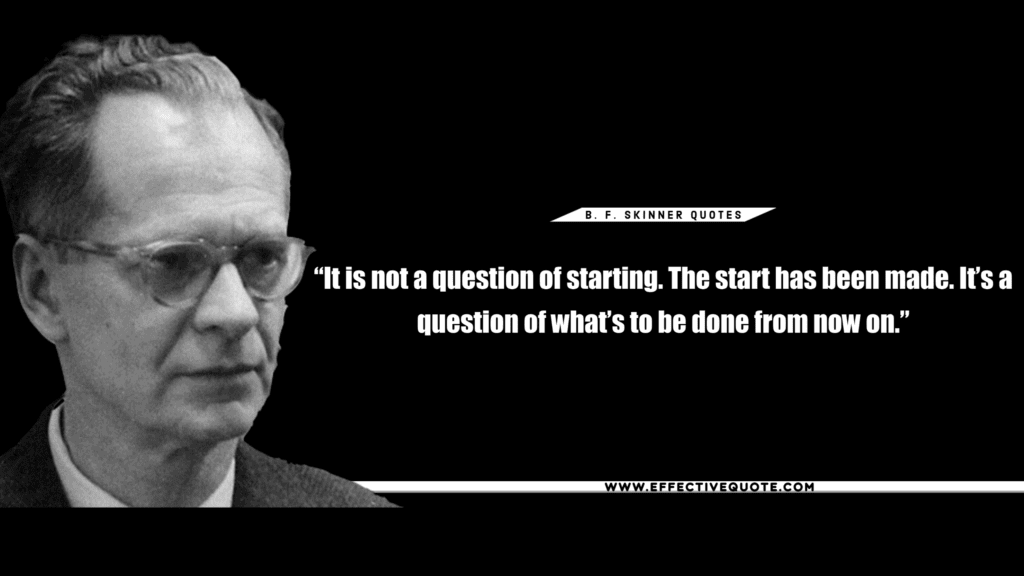 “What is love except another name for the use of positive reinforcement? Or vice versa.”

“The mob rushes in where individuals fear to tread.”

“The world’s a poor standard. any society which is free of hunger and violence looks bright against that background.”

“Does a poet create, originate, initiate the thing called a poem, or is his behaviour merely the product of his genetic and environmental histories?”

“The major difference between rats and people is that rats learn from experience.”

“The way positive reinforcement is carried out is more important than the amount.”

“Overcrowding can be corrected only by inducing people not to crowd, and the environment will continue to deteriorate until polluting practices are abandoned.”

“A failure is not always a mistake, it may simply be the best one can do under the circumstances. The real mistake is to stop trying.”

“The extent to which human aggression exemplifies innate tendencies is not clear.”

“Except when physically restrained, a person is least free or dignified when he is under threat of punishment, and unfortunately most people often are.”

“Society attacks early, when the individual is helpless.”

“A culture must be reasonably stable, but it must also change, and it will presumably be strongest if it can avoid excessive respect for tradition and fear of novelty on the one hand and excessively rapid change on the other.”

“If freedom is a requisite for human happiness, then all that’s necessary is to provide the illusion of freedom.”

“We do not choose survival as a value, it chooses us.”

“An important fact about verbal behaviour is that speaker and listener may reside within the same skin.”

“Does a poet create, originate, initiate the thing called a poem, or is his behaviour merely the product of his genetic and environmental histories?” ~ B. F. Skinner

“A person who has been punished is not thereby simply less inclined to behave in a given way; at best, he learns how to avoid punishment.”

“A self is a repertoire of behaviour appropriate to a given set of contingencies.”

“Something doing every minute’ may be a gesture of despair-or the height of a battle against boredom.”

“Death does not trouble me. I have no fear of supernatural punishments, of course, nor could I enjoy an eternal life in which there would be nothing left for me to do, the task of living having been accomplished.”

“When we say that a man controls himself, we must specify who is controlling whom.”

“Going out of style isn’t a natural process, but a manipulated change which destroys the beauty of last year’s dress in order to make it worthless.”

“We have not yet seen what man can make of man.”

“The one fact that I would cry form every housetop is this: the Good Life is waiting for us – here and now.”

“To require a citizen to sign a loyalty oath is to destroy some of the loyalty he could otherwise claim, since any subsequent loyal behaviour may then be attributed to the oath.”

“Behavior is determined by its consequences.”

“At this very moment enormous numbers of intelligent men and women of goodwill are trying to build a better world. But problems are born faster than they can be solved.”

“If the world is to save any part of its resources for the future, it must reduce not only consumption but the number of consumers.”

“A person’s genetic endowment, a product of the evolution of the species, is said to explain part of the workings of his mind and his personal history the rest.”

“It has always been the task of formal education to set up behaviour which would prove useful or enjoyable later in a student’s life.”

“Indeed one of the ultimate advantages of an education is simply coming to the end of it.”

“Old age is rather like another country. You will enjoy it more if you have prepared yourself before you go.”

“Give me a child and I’ll shape him into anything.”

“Do not intervene between a person and the consequences of their own behaviour.”

link to Who Will Cry When You Die Quotes

Effective Quote is a place where quotes like enthusiasts from everywhere come to share what they know! We're in love with the intense feelings of freedom and adrenaline that only this blog can give us. Learn more about us below.