She’s one of the most influential, widely read writers of the 20th century. And she never lived to see her book in print, or even to see her 16th birthday. We’re talking about Anne Frank, a symbol of resilience and lost innocence in the face of the whole. And Frank was born in 1929 in Frankfurt, Germany, the youngest daughter of a Jewish family Hitler and his antisemitic Nazi party Rose to power in 1933.

And so the Frank family moved to the more tolerant city of Amsterdam in the Netherlands in June of 1940, the Netherlands was invaded by Germany and conditions for people there, especially Jews began to deteriorate the Franks, tried to leave for the US but were blocked from doing so by restrictive immigration policies later on her 13th birthday, and received a simple present that would have enormous historical repercussions.

It was a blank dial. In it and Chronicle Turner, thoughts and feelings writing about her family and friends and boys, all the kinds of things you might expect from a young teenager as a began or diary. The situation in the occupied Netherlands worsened Jews were stripped of their rights forbidden from attending schools, from shopping at most stores and from taking public transportation, they were subject to a curfew.

And they were being sent to work in camps faced with these increasingly difficult circumstances. The Franks were needed. They would go into hiding they’re hiding place. A series of occupied rooms above the warehouse of the company was Anne’s father Otto had worked in early July of 1942. The Franks fled to this secret annexe while leaving acquaintances to think they’d actually fled the country.

The family would attempt to wait out the Nazi occupation. They had help from a small group of friends who brought them food and supplies and kept their secret. But the Franks and others could never leave the annexe. They lived in constant fear of discovery and arrest all this time for over two years and kept her diary.

She wrote with wit and awareness. Well, beyond her years, tragically, the Frank family’s time. And the secret annexe came to an abrupt end in August 1944. The Gestapo raided their quarters and sent everyone to concentration camps. The Franks were taken to Auschwitz and later, and in our sister and Margo were moved to the Bergen Belsen concentration camp in Germany in the late winter or early spring of 1945, they both died there.

Most likely if typhus, the only one from the annexe to survive the war was Ann’s father auto Frank. After the end of the war, auto returned to Amsterdam. One of the women who brought them food while they were in hiding me up, geese gave him a pile of papers and documents. She’d rescued from the annexe among those papers was Anne’s diary.

Otto was astounded by what he read and sought to bring Anne’s writing to a wider public first published in the Netherlands in 1947. Anne’s diary eventually came out in America in 1952 under the title and Frank, the diary of a young girl. And Frank’s diary remains one of the most widely read books across the globe.

It’s been translated into over 60 languages and over 30 million copies are in print. The world will never forget the story of Anne Frank and her family and the millions of others who lost their lives in the hallway. 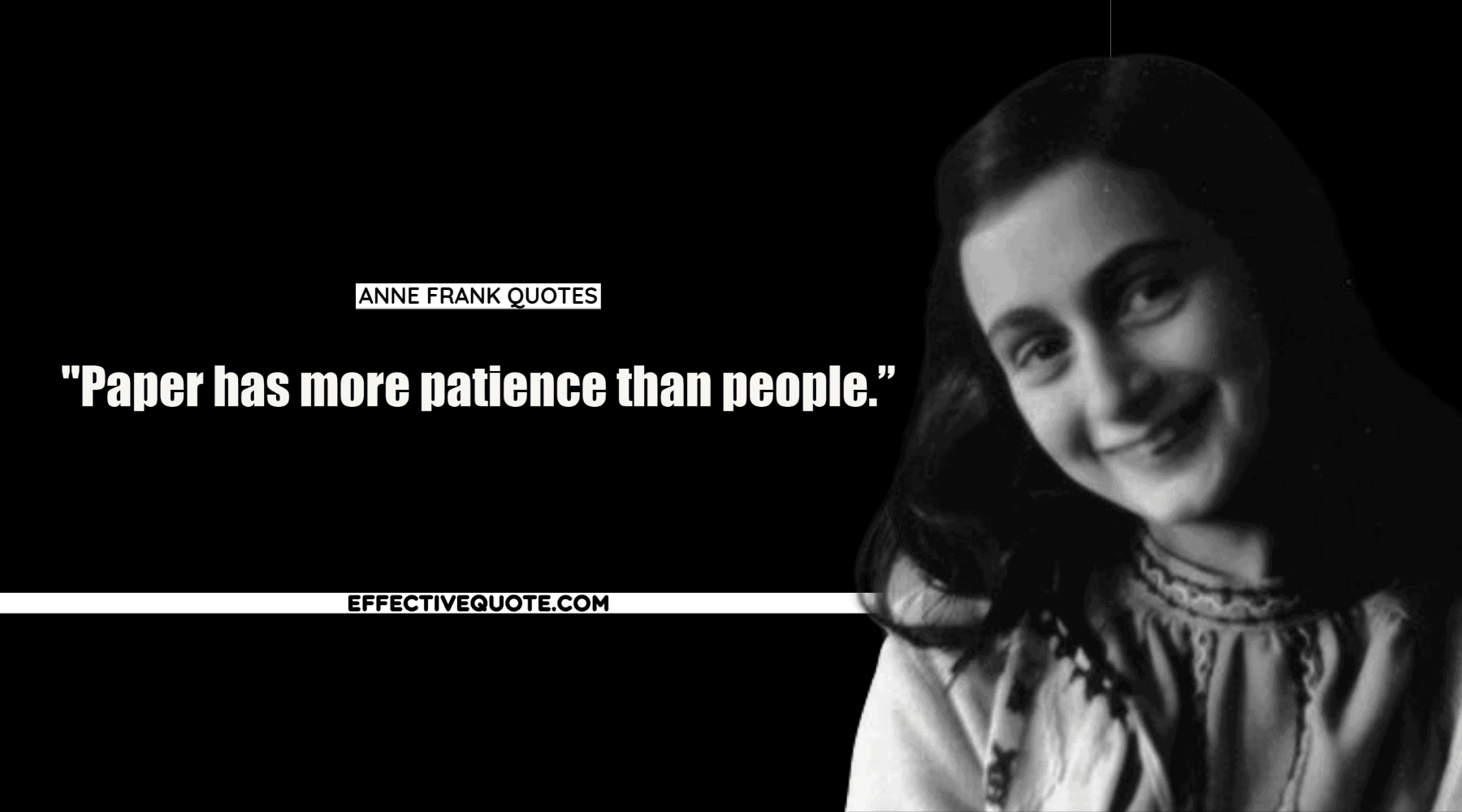 "Paper has more patience than people.”

“Memories mean more to me than dresses.”

“Anyhow, I've learned one thing now. You only really get to know people when you've had a jolly good row with them. Then and then only can you judge their true characters!”

“Ordinary people don't know how much books can mean to someone who's cooped up.”

“But feelings can't be ignored, no matter how unjust or ungrateful they seem.”

“I love you, with a love so great that it simply couldn't keep growing inside my heart, but had to leap out and reveal itself in all its magnitude.”

“I've reached the point where I hardly care whether I live or die. The world will keep on turning without me, I can't do anything to change events anyway.”

“People can tell you to shut up, but they can't keep you from having an opinion”

“Think of all the beauty still left around you and be happy.”

“A person who's happy will make others happy”

“I don't have much in the way of money or worldly possessions, I'm not beautiful, intelligent or clever, but I'm happy, and I intend to stay that way! I was born happy, I love people, I have a trusting nature, and I'd like everyone else to be happy too. ”

““I wish to go on living even after my death! And that's why I'm so grateful to God for having given me this gift, which I can use to develop myself and to express all that's inside me!.”

“It's God who has made us the way we are, but it's also God who will lift us up again.”

“In the eyes of the world, we're doomed, but if, after all this suffering, there are still Jews left, the Jewish people will be held up as an example.”

“I know what I want, I have a goal, an opinion, I have a religion and love. Let me be myself and then I am satisfied. I know that I’m a woman, a woman with inward strength and plenty of courage.”

“The weak shall fall and the strong shall survive and not be defeated!”

“I know what I want, I have a goal, an opinion, I have a religion and love. Let me be myself and then I am satisfied. I know that I’m a woman, a woman with inward strength and plenty of courage.”

If God lets me live, I'll achieve more than Mother ever did, I'll make my voice heard, I'll go out into the world and work for mankind!

“ I condemn are our system of values and the men who don't acknowledge how great, difficult, but ultimately beautiful women's share in society is.”

“Deep down, the young are lonelier than the old.”

“People who are religious should be glad, since not everyone is blessed with the ability to believe in a higher order.”

“When I write I can shake off all my cares. My sorrow disappears, my spirits are revived”

“Where there's hope, there's life. It fills us with fresh courage and makes us strong again.”

“There's only one rule you need to remember: laugh at everything and forget everybody else! It sounds egotistical, but it's actually the only cure for those suffering from self-pity.”

“Earning happiness means doing good and working, not speculating and being lazy. Laziness may look inviting, but only work gives you true satisfaction.”

“I still believe, In spite of everything that people are really good at heart.”

“A quiet conscience makes one strong!”

“I don't want to have lived in vain like most people. I want to be useful or bring enjoyment to all people, even those I've never met. I want to go on living even after my death!”

“As long as this exists, this sunshine and this cloudless sky, and as long as I can enjoy it, how can I be sad?”

“Dead people receive more flowers than the living ones because regret is stronger than gratitude.”

“Dead people receive more flowers than living ones because regret is stronger than gratitude.” ~ Anne Frank

“Whoever doesn’t know it must learn and find by experience that a quiet conscience makes one strong.” ~ Anne Frank

“An empty day, though clear and bright, Is just as dark as any night.” ~ Anne Frank

“If God lets me live, I shall attain more than Mummy ever has done, I shall not remain insignificant, I shall work in the world and for mankind!” ~ Anne Frank

“What is done cannot be undone, but one can prevent it from happening again” ~ Anne Frank

“Human greatness does not lie in wealth or power, but in character and goodness. People are just people, and all people have faults and shortcomings, but all of us are born with basic goodness.” ~ Anne Frank

“Sleep makes the silence and the terrible fear go by more quickly, helps pass the time since it’s impossible to kill.” ~ Anne Frank

“Don’t be too assuming, it doesn’t get you anywhere.” ~ Anne Frank

“Parents can only advise their children or point them in the right direction. Ultimately people shape their own characters.” ~ Anne Frank

“The reason for my starting a diary is that I have no real friend.” ~ Anne Frank

“People can so easily be tempted by slackness… and by money.” ~ Anne Frank

“I don’t believe the war is simply the work of politicians and capitalists. Oh no, the common man is every bit as guilty; otherwise, people and nations would have rebelled long ago!.” ~ Anne Frank

“In the future, I’m going to devote less time to sentimentality and more time to reality.” ~ Anne Frank

“Thinking about the suffering of those you hold dear can reduce you to tears; in fact, you could spend the whole day crying.” ~ Anne Frank

“People who give will never be poor.” ~ Anne Frank

“I love you, with a love so great that it simply couldn’t keep growing inside my heart, but had to leap out and reveal itself in all its magnitude.” ~ Anne Frank

“I feel the suffering of millions. And yet, when I look up at the sky, I somehow feel that everything will change for the better, that this cruelty too shall end, that peace and tranquillity will return once more.” ~ Anne Frank

“Ordinary people don’t know how much books can mean to someone who’s cooped up.” ~ Anne Frank

“Crying can bring relief, as long as you don’t cry alone.” ~ Anne Frank

“One gets on better in life if one is not overly modest.” ~ Anne Frank

“Let’s not talk about it any more, but if you still want anything please write to me about it, because I can say what I mean much better on paper.” ~ Anne Frank

“Sometimes I’m so deeply buried under self-reproaches that I long for a word of comfort to help me dig myself out again.” ~ Anne Frank

“Sometimes I believe that God wants to try me, both now and later on; I must become good through my own efforts, without examples and without good advice.” ~ Anne Frank

“I want to write, but more than that, I want to bring out all kinds of things that lie buried deep in my heart.” ~ Anne Frank

link to Malcolm X Quotes About Media Education and Love

"To achieve great things, two things are needed; a plan, and not quite enough time." Leonard Bernstein Quotes To Achieve Great...